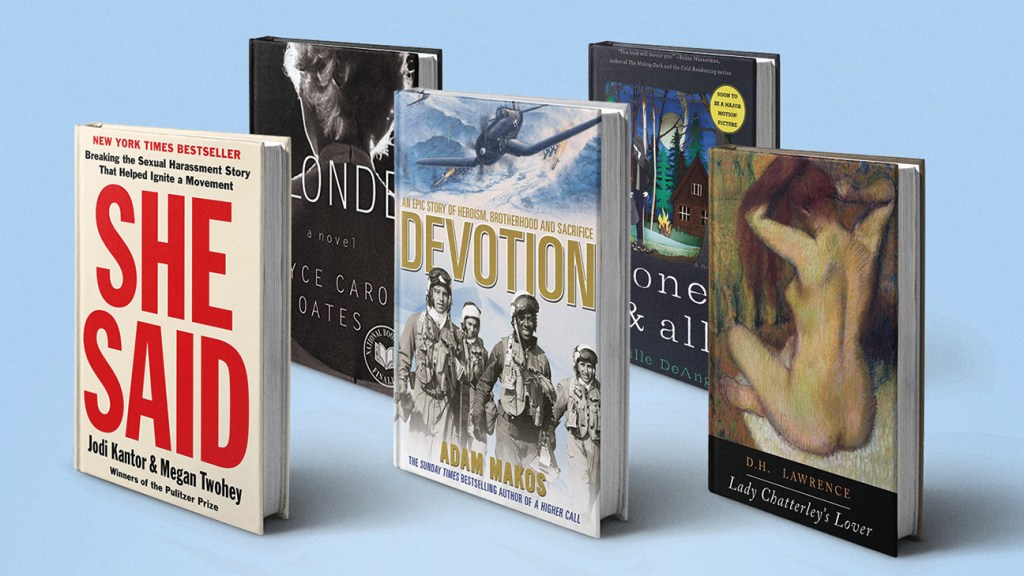 Books Hitting the Big Screen This Year – Beyond Bollywood

All Quiet on the Western Front (Netflix)

Andrew Dominik’s Marilyn Monroe biopic, based on Joyce Carol Oates’ novel, has garnered raves and pans in equal measure. Oates herself tweeted on Sept. 30 in support of the movie, saying “not all films are obliged to be uplifting in their conclusions.”

Bones and All (United Artists)

Luca Guadagnino’s ’80s-set feature is based on Camille DeAngelis’ 2015 novel and follows a pair of young cannibals in love as they roam the U.S.

Lena Dunham adapted the 1994 Karen Cushman novel about a 13th-century teenager who rebels against the patriarchy. “What I loved about ’90s YA was how it didn’t question young people’s intelligence,” Dunham told THR.

Director J.D. Dillard’s film — set amid the Korean War and based on Adam Makos’ nonfiction book — tells the story of Jesse Brown, the first Black pilot in the U.S. Navy.

Eddie Redmayne and Jessica Chastain play overburdened nurses — one of whom emerges as one of the most prolific serial killers in American history — in this true-crime thriller based on Charles Graeber’s book.

Marc Forster helms this interpretation of the 2013 comic novel A Man Called Ove by Swedish writer Fredrik Backman about a man thwarted in his suicide attempts by his rambunctious new neighbors.

Michael Grandage’s film, based on Bethan Roberts’ 2012 novel, stars Harry Styles as a closeted, married policeman who has an affair with a male friend. “Sales of the book just went through the roof,” says Grandage of the news of Styles’ casting. “It was absolutely berserk. I thought, ‘Oh my God, that’s the power of this boy.’ ”

Maria Schrader’s drama recounts journalists Jodi Kantor and Megan Twohey’s investigation into Harvey Weinstein. “If Megan and Jodi can walk away feeling OK about this and [the survivors] do too, then the job is done,” Carey Mulligan, who plays Twohey, told THR.

Noah Baumbach tackled the presumed “unadaptable” 1985 novel by Don DeLillo. “I couldn’t believe how relevant it felt to the moment,” said the director of the author’s work at the Venice Film Festival.

“The questions this book raised for me lived with me for a long time,” writer-director Sarah Polley told THR of Miriam Toews’ novel, about women in an isolated religious community struggling with their faith in the wake of mysterious sexual assaults.

Sebastián Lelio’s drama, based on the novel by Emma Donoghue, stars Florence Pugh as an English nurse who ventures to an Irish town to observe a young girl who miraculously claims not to have eaten anything for months.