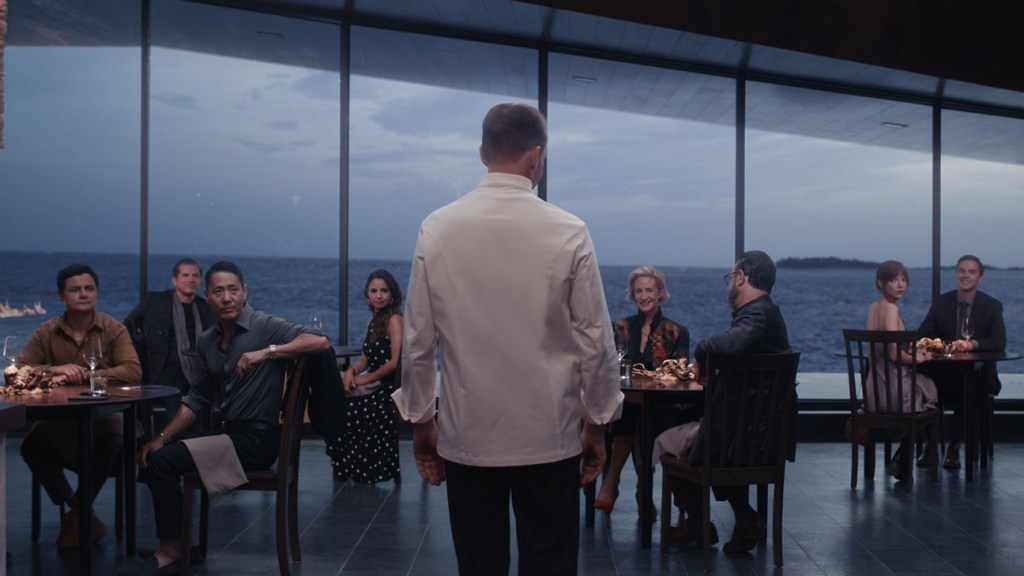 [This story contains spoilers from Searchlight’s .]

In The Menu, the exclusive experience presented by the remote, destination restaurant Hawthorn is as much about who’s in attendance as the meticulously crafted plates.

As Ralph Fiennes’ chef Julian Slowik eventually reveals, it’s because of what the curated tasting menu explores: the corrosiveness of hunger — for power, relevance, money, love and more — within all its diners brought together for a single, final night.

“We do skew them. They have a pretty rough night,” director Mark Mylod said of the movie’s peeling back of what enticed the guests into Hawthorn’s deadly trap. “But to be honest, I never intended to eat the rich. For me, the story was a genuine character study of flawed people. It was really a genuine exploration of why are they behaving like that? Why are they there? What choices have they made? How have their egos and entitlement led us to this place and for them to take this bait in terms of their own ideologies?”

Hand-selected for the event and each representing a different version of moral deterioration and (abrasive) privilege, the diners include an affluent couple, a food critic and her publisher, a foodie and a sex worker, three tech bros and a washed-up actor along with his assistant.

“We talked about, ‘What are the archetypes of people that would actually be in a restaurant like Hawthorn? It’s the rich tech guys, the luminaries of the food world,” producer Betsy Koch told Beyond Bollywood at the New York premiere. “We had the idea because Will Tracy — the writer of this film along with Seth Reiss — is a huge foodie. He goes to a lot of these restaurants. He’s like you can literally plot the different people that are around.”

It’s a group that’s not limited, as actress Hong Chau notes, by the literal “black and white way” Hollywood has traditionally talked “about the haves and the have-nots.”

“It’s not just wagging the finger at the old white guy because that’s a little too simplistic and reductive. There are so many people from all walks of life who occupy spaces of privilege,” she said. “I love that John Leguizamo is the one playing the aging movie star and the tech bros, who could have easily just been three jock-y white guys.”

See also  Did you know insane salaries of nannies of these star kids?

Throughout the night, the people in this group must each face their own “sins” as the director describes them — the conclusion, Mylod says, of the chef’s “mea culpa” six months earlier.

“This is a character that when we find him is absolutely swamped and drowning in self-loathing, and attempting to go out with some kind of a bang, but also on a moral level, paradoxically, to actually atone for his own corroded ego and for his abuse of his own power,” the director said. “He’s trying to atone for his sins as best he can. Obviously, he can’t, but the least he can do is own them.”

According to Fiennes, for his chef who surrendered to the feeding of his own ego, his is a journey about the tension between “an obsessive-compulsive narcissist” wanting perfection and moral clarity.

“He’s someone who started off with very pure aspirations about how you make food or you get your food to people, and I think he hates himself because he’s obviously a genius, but he’s allowed himself to become very remote,” the actor explained. “What I liked was the complication. He doesn’t like what he’s doing. He doesn’t like where he’s gone. There’s a real contradiction inside him that he wants the power and the control, but at a deeper level, he despises himself for it.”

It’s not just that desire for adulation and authority that has brought him and his guests to this moment. As viewers learn, he was involved in harassing a female subordinate, a sous chef by the name of Katherine (Christina Brucato), who is revealed to have conceived the night’s twisted concept and explosive end.

“With the gender dynamic in the kitchen, we wanted Katherine to talk about what it’s like to be a young woman who’s trying to navigate an incredibly male-dominated industry. How tough that is day in and day out just to perform at that level and have that much pressure on you,” Koch explained.

This thread is one of the most direct connections to the diners and the film’s larger exploration of gender in fine dining. A wealthy, aging man whose dark secret is the nature of his gross infidelity, Reed Birney’s Richard had previously subjected another one of the night’s attendees to harm through his sexual behaviors.

The two men are responsible for their misbehavior but in noticeably different ways, with the latter ultimately forced to lose his wedding ring finger. For Birney, Julian’s decision to take accountability versus Richard being made accountable goes beyond the chef’s connection to low-paid service workers. “The guys from my generation when they misbehave, they’ve gotten away with it for a long time,” he said. “The first impulse is to deny, and maybe the younger generation is conditioned somehow to come clean.”

John Leguizamo’s George is an aging action star inspired by Steven Seagal who has lost his artistic authenticity amid diminishing industry interest and control over his career. It’s something both a present and future Julian can relate to — and fear.

“They all have something toxic about them and one of his bad qualities is narcissism. He’s vain and that’s part of his downfall. One of the reasons that he’s there is to show off. He’s there to suck up the oxygen,” Leguizamo said, before noting how his character’s “sins” are slightly different than the other men’s in the room. “The other guys are really despicable, but this guy — you feel a little pity for because he’s a failure. He’s a washed-up action star and there’s something very sad and tragic about somebody who is at the top of their game and then no longer is.”

While the movie has plenty of bad men, it doesn’t limit its critical eye to the privilege and abuses of one gender. The film also features several women, all of whom earned their seat at the table. Judith Light, who plays Richard’s wife Anne, sees her character as a woman desperately clinging to her “self-esteem, her place in the world, her entitlement, her wealth and the kind of lifestyle she thinks she wants to have.”

“We were allowing ourselves not to speak up, not to say anything,” Light said of the women diners, with the exception of one. “[Anya Taylor-Joy’s Margot] took back what a lot of the other women let go but what they felt they wanted.”

Light notes that there is a connection and camaraderie that develops between these women, despite class and other distinctions. For Anne, it leads to a realization that sees her in “some ways take her power back.” But ultimately, like the men, these women’s entitlement and inability to lift their own fingers serve as their downfall.

“They do behaviors they think will get them what they want,” Light said. “But everyone in the film, as Anya has said, is hungry. They have wants, needs, hungers that they’re not able to solve in the ways that they have always been trying to solve them.”

While that hunger lives both literally and metaphorically within Hawthorn’s front of house, The Menu is also interested in exploring hunger and power through the back of the house. It’s a place that, as Katherine’s storyline reveals, is also full of toxicity, fueled by powerful men like Slowik and those willing to work in a place that consumes them in more ways than one.

“We all have tremendous anxiety related to perfectionism and the industries I think that promulgate the greatest level of perfectionism are rife for satire and horror because people forget themselves,” said Ethan Tobman, The Menu’s production designer. “All they want is for chef to promote them, notice them — and they resent him when he takes their ideas and makes them his own.”

This drive and desperation to attain power within the culinary world at great personal costs manifest in a number of shocking moments involving Hawthorn’s kitchen staff. In one sequence, Slowik’s second, Elsa (Chau), literally fights Taylor-Joy’s Margot to the death to remain what actress Chau calls the chef’s “ride or die.”

“I wanted to make sure that my character Elsa felt like she was incredibly intelligent and capable and took pride in what she did. I saw her as the campaign manager for a political candidate. She was so proud of what they had achieved and accomplished together and would not let anything come in the way of that,” she said. “There is something very profound in that — even though it is a fight scene and an entertaining action scene.”

For The Menu team, exploring the hunger and corrosiveness that permeate the entire culinary ecosystem was one of its ultimate goals.

“The toxicity in the kitchen you hear about from the hierarchy of the industry is also a reaction to the toxicity of the patrons and how they react to the food,” Tobman pointed out.

“One thing that we want people to understand when they see this movie is the different levels of servitude and exploitation and what it’s like in an industry like this — to see people that give their bodies and souls to this type of work,” producer Koch added. “We almost wanted to implicate the audience in a way to take a closer look at their own behavior.”

The Menu is in theaters now.