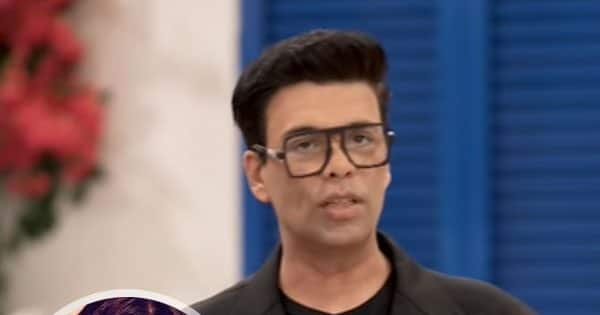 Karan Johar gets massively trolled for his Alia Bhatt obsession; gets compared with her character in Brahmastra

Karan Johar’s Koffee With Karan 7 ends on an interesting note. Kudos to Karan, who dares to laugh at himself and bares it all. He invited 4 popular comedic influencers and asked them to roast him. In the promo, you can see Karan asking an influencer if he talks more about Alia Bhatt on the show as she is allegedly doing the same thing every time. He got the answer in the most hilarious way possible, though. “I saw Brahmastra recently where Alia kept saying Shiva Shiva, and that’s how you do it in your show,” Danish quipped. Oh boy, it takes courage! Also Read – Alia Bhatt Eats Pizza From Mother; Thanks to Shilpa Shetty Kundra for fulfilling her midnight cravings

Karan Johar was later asked about his breakup by Kusher and added that Varun Dhawan is a sweetheart. Karan later reveals that Varun found out about his break up by default and yes he was really very supportive. To whom Tanmoy Bhatt who is known as Sassy, ​​asked her if she was dating David Dhawan. Another lady Niharika was curious to know who broke up with Karan. Karan is seen stressed by all these questions as the filmmaker gets a taste of his own medicine. He also indulged too much in everyone’s personal life and that’s why many celebrities refused to come on the show. Also Read – Trending Entertainment News Today: Shah Rukh Khan’s shirtless Pathan look creates frenzy, Brahmastra makers’ pricing masterstroke and more

Karan must have invited trouble for himself by inviting these four comedians on the show, but it will surely be an entertaining watch for all the viewers. Some fans of KWK are already mourning that the seventh season is coming to an end. The show started with Alia Bhatt and Ranveer Singh and now looks like it will end with Danish, Kusha, Niharika and Tanmoy. Also Read – Brahmastra: Ranbir Kapoor-Alia Bhatt starrer makers pull off a masterstroke; The film will screen in its third week at this price [Read Deets]