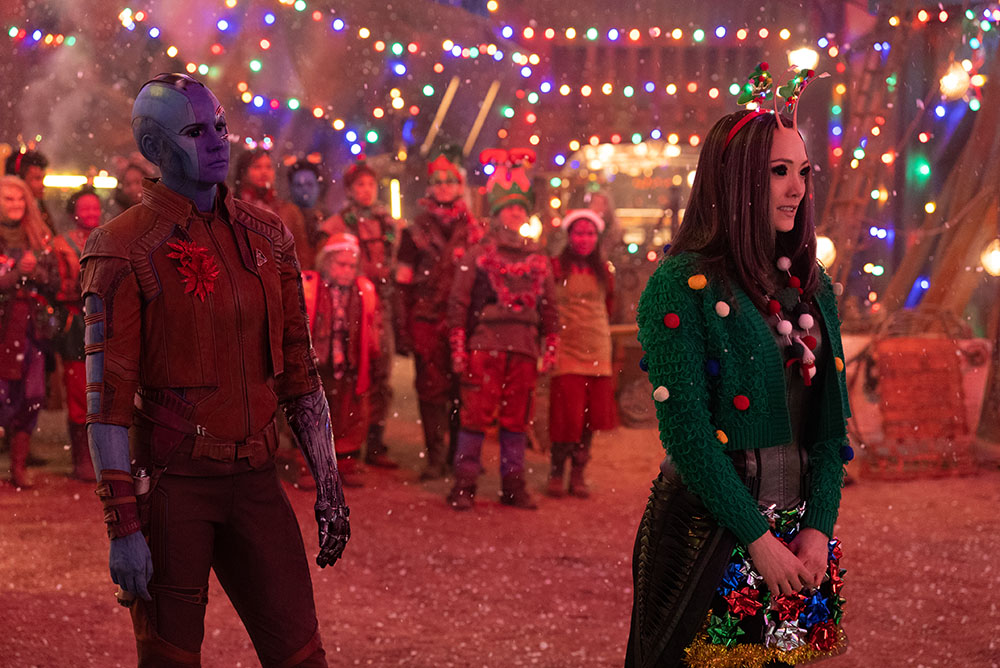 ‘The Guardians of the Galaxy Holiday Special’ Review – Beyond Bollywood

In retrospect, it makes an odd sort of sense that the first Marvel Cinematic Universe superheroes to get their own Christmas special (that is, a proper Yuletime-themed standalone and not merely a story set in late December; sorry, Iron Man 3 and Hawkeye) would be the Guardians of the Galaxy.

Sure, they’re literal aliens so new to the entire concept that they understand Santa to be a flamethrower-wielding freak whose elves want to stab his eyes out, as spelled out in a jaunty original tune over The Guardians of the Galaxy Holiday Special‘s opening credits. But of all the Marvel sub-franchises, none have been more explicitly focused than this one on the holiday-appropriate concepts of family, love and home — and none better at spiking the deep feelings associated with them with just enough irreverence to keep its sweetness from turning cloying.

The Guardians of the Galaxy Holiday Special

Written and directed by James Gunn, The Guardians of the Galaxy Holiday Special opens by bringing in the big guns, emotionally speaking: an animated flashback invoking memories of Yondu (Michael Rooker), whose death in 2017’s Guardians of the Galaxy Vol. 2 still ranks high on any list of Marvel’s most tearjerking moments. Here, the irascible Ravager fills the genre-requisite role of Christmas skeptic — Kraglin (Sean Gunn), in the live-action present, explains it’s Yondu who ruined the day for a young Peter by trashing his tree, throwing out his presents and scolding him for his sentimentality.

Moved to pity by this anecdote, Mantis (Pom Klementieff) takes it upon herself to “save” the day for Peter, who’s been grieving Gamora since the events of Avengers: Infinity War. Enlisting the help of her BFF Drax (Dave Bautista), Mantis sets out for Earth in search of Kevin Bacon — a hero Peter speaks of with such reverence that the duo assume him to be ruler of all Earth, or at least of most people — with the intention of delivering him to Peter as the perfect gift.

The special devotes a sizable chunk of its 40-ish minute run time to sitting back and enjoying the spectacle of Mantis and Drax, total weirdos even by Guardians standards, struggle to make sense of the hustle and bustle of Hollywood. Upon landing near the Walk of Fame, they fall in with the costumed characters posing for photos by the Chinese Theater and discover tequila shots at a raucous bar. They also learn, eventually, that Kevin Bacon is not a real hero but only an actor who plays heroes, providing the Guardians of the Galaxy Holiday Special cast with many (maybe too many) opportunities to make winking comments about how totally repugnant actors are.

The chaos that ensues once they find him is predictably zany, with Mantis reassuring a pair of terrified cops that “We are not doing anything wrong, we are just taking the legendary hero Kevin Bacon to give him as a present to our friend, who is sad about Christmas.” The Guardians of the Galaxy Holiday Special contains few real curveballs, give or take a delightfully eclectic soundtrack that eschews the usual “Jingle Bells” and “Joy to the World” covers for the likes of Fountains of Wayne’s “I Want an Alien for Christmas.”

But that’s hardly a complaint when shocking the audience was never the project’s goal to begin with. It was to deliver on all the twinkly lights and fuzzy feelings we’ve come to expect from our Christmas entertainments, and that it does in spades. So of course there’s a moment when a character’s face lights up with awe at the sheer magic of the moment, and another when a character tearfully declares something “the greatest Christmas gift I could ever get.” Of course the real Christmas spirit winds up being the friends we made along the way, or something, even if one of the “friends” in this case is a disoriented A-list actor who has no idea how he wound up partying with extraterrestrials in the first place.

The Scrooge in me can’t help but point out that, despite the gang’s adorably scrappy vibe, The Guardians of the Galaxy Holiday Special is as slick a bit of marketing as they come. Its release could not be better timed to remind audiences how much we love these characters, who haven’t headlined a big-screen adventure in five years. The script is sprinkled with crumbs of awkward (though thankfully easy to ignore) exposition that will surely become relevant once they return to theaters in 2023’s Guardians of the Galaxy Vol. 3. And the whole project is underwritten by the kind of studio clout and money that can get a Kevin Bacon to show up and hang out with aliens for a few days.

And yet it all works, at least if (like me) you’re a bit of a sucker for the Guardians to begin with. It’s funny enough to provoke out-loud laughter and poignant enough to elicit that telltale sting behind the eyes, if not quite enough to draw full-on tears. Maybe it lacks the heft of a true Guardians feature or series, but it’s exactly the holiday confection you’d want from this motley crew: shiny, fluffy and just odd enough to feel personal.